Drawing from the strength of my father 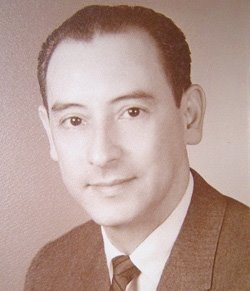 As I watched the "Adventures of Louis and Clark" on television almost 10 years ago, I realized then that, at times, I played the role of Clark Kent in my life.

At times I would find myself falling over chairs and desks, clumsily trying to keep myself from falling on my face. Yet, at other times, I might fall in love with someone and never let the her know (back in my college days).

But what I found I had the most in common with Clark was that, I, too was hiding a secret identity. On October 28, 1995 my father, Max Zacapa, passed away and I was trying to live my life as it was before his death.

But the truth was that my life was not the same though it may have appeared that way to others. My mother and I were experiencing financial constraints. We would worry about the bills and getting my brother and I through school. My father deeply desired that we would both get a quality education.

As a San Jose State University student, I seemed to put on my glasses (literally and figuratively) as Clark Kent did. I took on the task of working for the Spartan Daily Newspaper, taking 18 units, and juggling a part-time job. All the while pretending that all was well with me.

I believed that it was important for me to do this. As I would take the bus to school, I remember hearing in my head the words that my father had told me, "Life is hard son, but to succeed you must fight back and pursue your goals."

When I discovered that my father had cancer and that it had been declared terminal my heart sank. My fists clenched and I remember punching the night air swiftly as I left the hospital feeling despondent.

I would eventually drop all my classes at West Valley College to be with my father. I spend the whole spring semester with him and I got to know him like I never knew him before.

I visited him every day at Sub Acute - a rehabilitation hospital - and we played cards and shared the sun in the patio. He told me stories about my family heritage in Honduras and of his voyage to America to start a new life. It was as if he had a secret identity all his life that he was just now revealing to me.

He told me of one of his first jobs in factories and how he broke his back one too many times. How he cried "tears of blood" and how he, at age 49, married my mother after just two months of dating.

Later as my mother quit her job in the summer to be with my father full time, he convinced me to go back to school. I did it for him, and when I attained my Associate in Arts degree it brought a smile to his face that I will never forget.

I have come to see a lot of my father in myself. We are both reserved, determined, sensitive and known to wear glasses to hide from life's tough times.

For me, my father was truly a "Superman," and his struggles have made me who I am today as I continue to work to make him proud.

Hours before his death he was asked if he was ready to die. He answered, "I want us to keep fighting together." I hope I can continue to do just that.
Posted by Eddie Zacapa at 5:07 PM

Eddie,
Thanks for sharing this. I think of that night often and how strong willed he was. He didn't have to keep fighting and he knew it was close to the end, but he wanted to fight for us. He was a great man and I hope that some day soon I can be as good a dad as he was for us.
Happy Father's Day!
Roger

Eddie,
You are such an inspiration!
We love you so much! Thank you for sharing your gifts and for being such a great husband and dad.

Eddie,
Thanks for sharing, you are one of the most kind spirited people I know, hugs to the family, Happy father's day!
Doriel