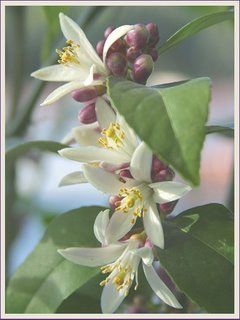 We received a beautiful floral plant as a gift shortly after Adam was born. It was a gift congratulating us on having our baby. I remember feeling sad when I brought it in from our door step, thinking, "Oh, no! This thing will be dead in a few weeks!" and "Why do people give gifts you have to take care of when you've just had a baby? I barely have time to take care of myself especially after having a c-section!" I was annoyed.

A few weeks passed and, just as I thought, the plant began to die of dehydration. I finally gave up on trying to keep it from dying and left it alone to dry up. But that week I dreamt that I suddenly had "the Magic touch" and every plant I touched flourished. The flowers bloomed and brown leaves became green again.

I've always wanted a green thumb like my mother. We used to have a huge backyard with different fruit trees (grapevines, apple trees, even an artichoke plant), an area just for roses, another area for her vegetable garden and a beautiful lawn. I'm amazed at how immaculately she kept it.

Later, when I thought about the dream I had, I realized that touch is just what everyone and everything needs to thrive. When we just take the time to give a bit of ourselves, life will give birth to life.

A friend, that studied child development, recently told me that when an infant is born and is fed and given all other basic necessities but isn't physically touched, the child could die because babies need human touch in order to survive.

I began to think of all my relationships, the people and things I might have neglected.

I wanted to try once again to revive my dying plant, but nothing worked. It was gone and I finally decided to throw it out. It seems that the same thing happens when people are taken for granted; the relationship withers and dies.

Recently, I helped edit Reflections of Narnia, Eddie's new book. One of the chapters was about how God left His creation in our care. How He spoke the world into existence and we are called to watch over it. Genesis 1:28-31

I write this so that I can remember to take better care of the things He has entrusted me with.
Posted by Eddie Zacapa at 2:55 PM

thanks for sharing this rach. love tiffany*

Hello Rachel,
I know it has been a while since we've seen you and the family. I loved what you said here and it so true. We all need that human touch and the love that flows from our hearts.
Michelle Jerkovich