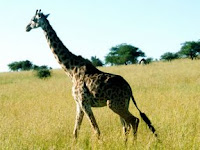 Making an apology is never easy. It means we accept responsibility for having done something that was unhealthy. We all have done it at some time in our lives. Many times we dreaded doing it and quickly wanted to get it over with. We recognized that we did something to stimulate pain in another and we had a desire to apologize. But what happened next was probably very superficial. We said those two famous words people usually say when they make a mistake, "I'm sorry."

Many times that is not enough. People may respond, "that doesn't do me any good" or "it's too late for that now." That is probably because they want more. They want what all of us want when somebody does something that stirs up pain in us. They want understanding, empathy and sincerity.
Marshall Rosenberg, the founder of nonviolent communication (sometimes referred to as giraffe language), coined the term giraffe mourning for what he recommends we do when we do something that doesn't serve life. It is called giraffe mourning because the giraffe has the biggest heart of all the land mammals. The idea is that we allow ourselves to feel at the heart level and not brush aside our feelings. He says that instead of judging ourselves and getting stuck on guilt we are better served if we allow ourselves to mourn what we did that stirred up pain in others. He calls this a sweet pain that leads to change. Then we can ask ourselves what we can do next time and make a commitment to do this and/or offer a giraffe apology (giraffe mourning) to the person.
An excercise we can do to experience giraffe mourning is ask ourselves four questions.
1. "What is it that I did that I regret?
2. What do I feel right now when I consider what I did?
3. What need of mine was not met when I did what I did?
4. What could I have done to meet that need in that situation?
To offer a giraffe apology instead of just saying, "I'm sorry" we can do the following:
1. State what it was that we did that we regret.
2. Share how we feel about what we did that we regret.
3. State what need of ours was not met by doing what we did.
Example:
"When I realized how what I said stirred up so much pain, I felt deeply saddened because I didn't meet my need to respect you or value you. I wish that I could have responded differently because the last thing I wanted to do was to stir up pain."
Which would you prefer to hear? The two words or a giraffe apology? For some more communication tips click here.
Posted by Eddie Zacapa at 3:56 PM