Save Domestic Violence Shelters From Closing 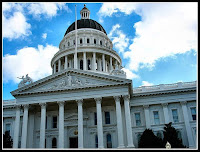 Recently Senator Leland Yee wrote two bills that would restore the funding but needed the support of the Speaker of the Assembly, Karen Bass. She needs to allow for the bill (SB 662) to be heard before September 11th in order for it to not die on the floor.

It appears that the bill was supposed to be presented on Thursday, September 3rd and encountered an unfortunate delay.

The bill proposes allocating existing money from the Crime Victims Compenstation Fund that has millions of dollars in the fund. If you live in California you can contact Speaker Bass at (916) 319-2047 and encourage her to present this bill before Septermber 11th. You can also contact your local state assemblymember and encourage them to vote "yes" if the bill is presented for a vote. To find out who to contact click here.

This site is about inspiring others. I hope that this inspires you to make a difference that can save lives.