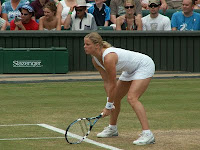 Kim Clijsters made history when she won the U.S. Open on September 13th and became the first mom to win a major since Evonne Goolagong Cawey took the 1980 Wimbledon title.

After the winning point she fell to the ground and started crying. After having beaten Serena Williams in the semi-finals and then beating No. 9 Caroline Wozniacki for the title she moved many people with her amazing comeback tale.

Clijsters, who was invited to the tournament as a wildcard, had taken two years off from playing tennis to focus on her family and baby. Her baby, Jada, 18-months old, and husband were both present to watch her win.

She said in a post interview of the unbelievable comeback, "This is something that I ... in my wildest dreams could never imagine happening."