Martin Luther King Jr. "I Have A Dream" 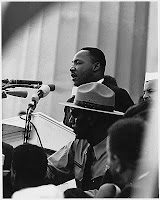 SEEING THE REDEEMING QUALITIES OF OTHERS
There are many stories about Martin Luther King Jr. that remind us of his dream. There is one story in particular that stands out to me and inspires me today.

Opening The Door To Change
King believed that the only way to influence Kennedy was to discover one redeeming quality that they could say about him. That one thing could lead them to opening a door to accomplish the change they desired.

What was discovered through all of this was that Bobby Kennedy was close to his bishop. The team worked with the bishop and were so successful that by the end Bonafante himself said, "there was no greater friend to the civil rights movement [than Bobby Kennedy]. There was no one we owed more of our progress to than that man."3

By looking at the redeeming qualities in others we too can see their potential and beauty. We can see their humanity and not an ememy image. This act of seeing the positive qualities in others can be the road towards making peace and collaboration. This is one of the lessons that I have learned from Martin Luther King Jr. I hope that it inspires you to see beyond the negative and to see the potential in others.

So many stories but so needed for us to read them.
kim