Congresswoman Gabrielle Giffords Gets Tulips and Toast for Valentine's Day 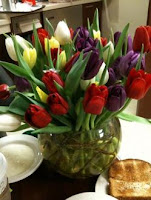 Congresswoman Gabrielle Giffords received tulips and toast from her husband Mark Kelly for Valentine's Day. Giffords was shot in the head on January 8, 2011 and is recovering at TIRR Memorial Hermann Hospital in Houston.

It is reported that she asked for toast with her breakfast last week. These apparently were her first words spoken since the shooting. According to the status of her facebook page an update reads:

An update by her husband, who has been by her bedside, on facebook states:

"It is hard to believe that only one month has passed since Gabrielle was shot. The doctors say she is recovering at lightning speed considering her injury but they aren’t kidding when they say this is a marathon process.

"There are encouraging signs everyday though. Gabby’s appetite is back and – ...even though it’s hospital food – she’s enjoying three meals a day. We can’t thank you enough for the heartfelt show of support that has come in from all around Arizona and the nation.

"I want the families of all the other victims and the entire Tucson community to know that Gabrielle will soon stand by your side to mourn this tragedy and learn how we can heal. In the meantime, your prayers are being heard, so don’t stop."

Astronaut Mark Kelly, who has flown in space three times, says that he is "closest to heaven" when he is with his wife. To watch a video of Mark Kelly talking about his wife's shooting, miracle recovery and their love in an interview with Diane Sawyer click here.