Doing What is Right: Bystander Intervention 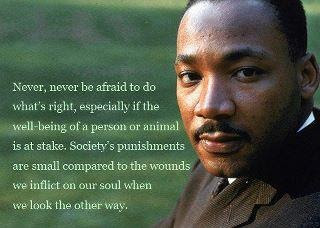 Be an Active Bystander
This quote reminds me of how important it is do the right thing (that which serves life). No matter how hard it may be to do the right thing, we bring enrichment, peace, safety, care, and justice to the world when we do.

It is alarming that many times people do not do something to help others when others are in danger. Much research has been done to prove this point: that for some reason people do not help others in times of need. One famous case is the Catherine Genovese case.

Catherine Genovese Case
In 1964 more than 38 law-abiding citizens in Queens, New York watched a man stab a woman on three separate attacks in a half an hour time period.

Many residents of an apartment complex at one point turned on their lights and one resident actually told the man, "Let that girl alone!"

The assailant got in his car and drove off.

But it wasn't long until he came back. As Genovese was staggering to try to get in to the apartment complex the assailant stabbed her one last time ending her life. Thirty minutes had passed and not one person called the police. One witness called after Genovese had died. The police arrived in 2 minutes.

Responding with Care & Action
Whether it is a parent who is abusing a child, a man who is battering his wife, someone sexually harrassing another, a bully making fun of someone, or a person who is abusing a pet, we lose a part of ourselves and our humanity when we do not respond with care and support for others.

I challenge you to not be one of those many who do nothing, say nothing and look the other way. May your eyes and ears be vigilant when injustice occurs and may you respond with courage, honor and support for those who need you. For some strategies on things you can do to be an active bystander click here.

"In the end we will remember not the words of our enemies but the silence of our friends." - Martin Luther King Jr.
Posted by Eddie Zacapa at 9:28 PM

What a wonderful post!!! We must do more than stand by and let injustice happen. I know I could never see something like that happen and not do something. Sadly, there are a lot of people who will ignore it and just let it happen.

When you have a chance, check out my page!

Thanks Jean! I'm glad you found me. Nice site. I like the design.