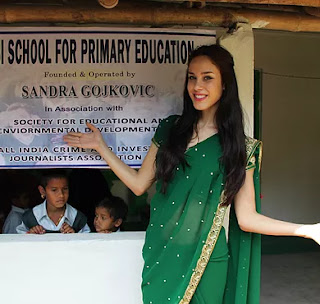 In India, girls are married off early, parents are not aware of the importance of education, school standards are low, and children are forced to work to help their parents in earning a living.

The India School Project (TISP) is a non-denominational and politically neutral charitable association headquartered in Switzerland. It invests in the education and well-being of disadvantaged children and their mothers in rural, underdeveloped villages on an island in India. As it is self-funded and reliant on donations, the association members work on a voluntary basis.

At present 170 children, divided into six classes, are being educated at a primary school and an additional 150 students at their Education Support Program in a small village in India. The curriculum is based on a holistic approach, which stimulates the cognitive, social and emotional growth of the students. Apart from the main subjects of math, English and Bengali, extra-curricular subjects, such as dance, singing, sports and yoga are taught. Furthermore all students are served a daily warm meal.

Sandra Gojkovic, founder and president of the association, states, "This has a positive effect on their performance and serves as motivation for regular class attendance."

The school was recognized by the state government and was listed in the official school directory last year.

Circle of Poverty
Gojkovic, states, "I learned that the circle of poverty has its roots in the rural areas, far away from the well-known slums of the big cities. Low living conditions in rural villages cause people to hope for a better life elsewhere and so they migrate to large cities where few succeed in finding a better life for themselves. Most emigrants end up in miserable slums and are forced to continue their lives begging. Our support, therefore, had to be based in the rural areas, so that help can be offered where it is most needed, while simultaneously easing the burden on the overcrowded urban slums." 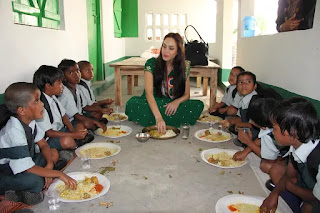 Gojkovic enjoyed traveling with her parents at a young age. The travels exposed her to various cultures and experiences including witnessing poverty. She states, "Being confronted with poverty awakened my desire to help disadvantaged people at an early stage. I attempted to keep up with that by regularly donating money to various charities throughout my studies. However, this only fueled my drive to become involved and the plan to personally and actively help had been at the back of my mind ever since."

A work opportunity in Dubai opened new doors for her career in the field of Business Development and Marketing. In 2011 she embarked on a journey throughout India, which allowed her to redefine her priorities. She encountered unbelievable poverty that she could barely put into words. She shares, "As a backpacker, I crossed several areas of India by myself, visited several NGOs and helped locally in order to understand the source of this poverty and the potential for providing sustainable aid."

Given the fact that the drop-out rate at public schools in India are amongst the highest in the world,
it is remarkable that all final year students they worked with have passed the state exams.

Poulty Farm Social Business
In 2013, Gojkovic moved to Bangladesh for 3 months to study Social Business under The Nobel Peace Prize Winner Prof. Muhammad Yunus. This led to another venture: A poultry farm social business, which generates income and provides employment to villagers. So far, the group have created 20 jobs, which contributes to the improvement of the economic situation of the entire project area.

Women Empowerment
Gojkovic states, "As we believe in a holistic approach, we are about to set up a tailoring training center/Social Business to provide training as well as employment to women. They are the nurturers of the family and spend their profits on the whole family. Their income therefore leads to more literate children and less child labor as they are not dependent on additional income."

Twenty-five women just completed their tailoring training last month and will each receive another two months of additional training. 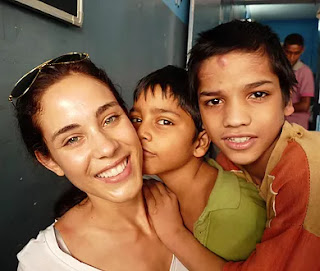 The founder states, "My dream of being able to achieve a positive change in the world was realized step by step. In 2012, the money I saved up and the support of local partner organisations enabled the birth of the The India School Project.

"I currently dedicate every spare minute I have left after my studies and a part-time job to develop the project so that as many children as possible can be supported. I am very happy to be able to rely on the support of my family, friends and donors and thank them from the bottom of my heart.”

How You Can Help
Thanks to the combined effort of a team of 20 employees in India, as well as a board of seven members in Switzerland and the UK, TISP became a functioning reality. Simultaneously, without the support of private donors, foundations and volunteers in Switzerland and abroad, they could not have executed their work. Therefore any kind of help is highly appreciated. If you wish to make a contribution, kindly visit the organization's website at www.theindiaschoolproject.org or directly contact Sandra Gojkovic at sandra@theindiaschoolproject.org
Posted by Eddie Zacapa at 12:09 AM